Of All The Flowers I Did Not Plant

Isn't it enough to see that a garden is beautiful without having to believe that there are fairies at the bottom of it too?  ~ Douglas Adams

I believe in everything until it's disproved. So I believe in fairies, the myths, dragons. It all exists, even if it's in your mind. Who's to say that dreams and nightmares aren't as real as the here and now.  ~ John Lennon 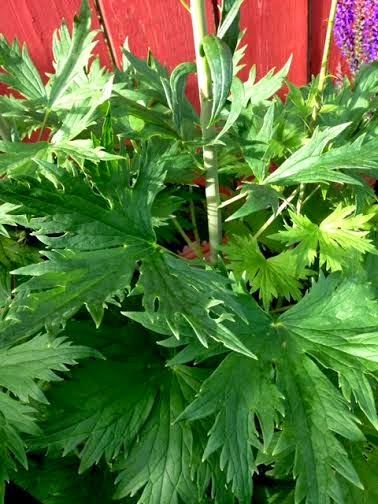 Of all the flowers I did not plant, there is one that is my favourite.  I don't know that it is polite to pick favourites when it comes to the flowers in your garden.  But I have one anyway.

It sits in the corner of the faerie garden.  That strange strip of land where everything grows happily, no matter what it might be, or what its light or soil requirements are.  So many things have appeared there, just like magic. A vast selection of plants I did not seed in, or buy from a garden center.  "Weeds" like chickweed, plantain and dandelion sneak in, but that's to be expected.  What is unexpected is the strange flowers that pop up from who-knows-where.  Flowers I've never laid eyes on. 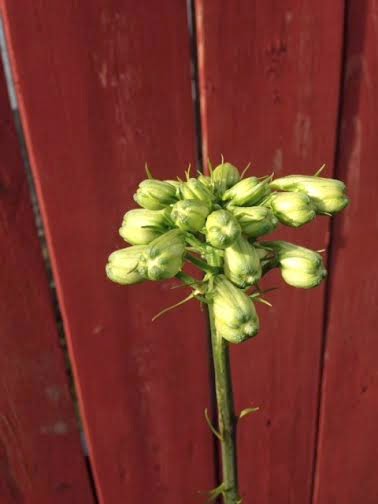 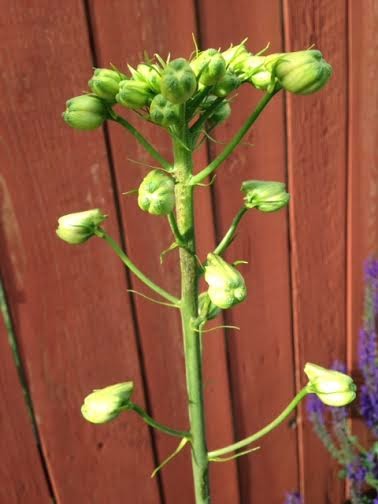 I waited for it to flower, and was terribly confused when it did.  I nearly pulled it out that first year - disappointed in its odd look and sudden encroachment in my garden. 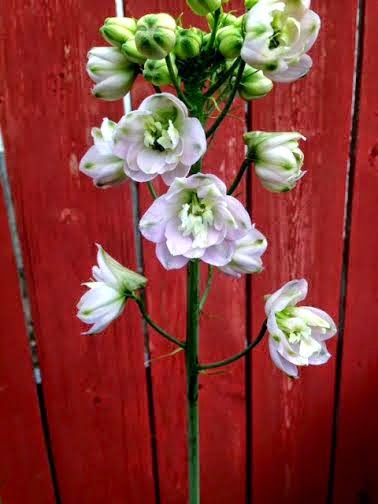 But it grew on me - the mysterious beast.  Each year I've been waiting to see what it will do.  The flowers are the lightest pink, some veined with green.  It looks like a delphinium, but not one I've ever seen.  Just a tuft of flowers on the top of wildly tall stems. 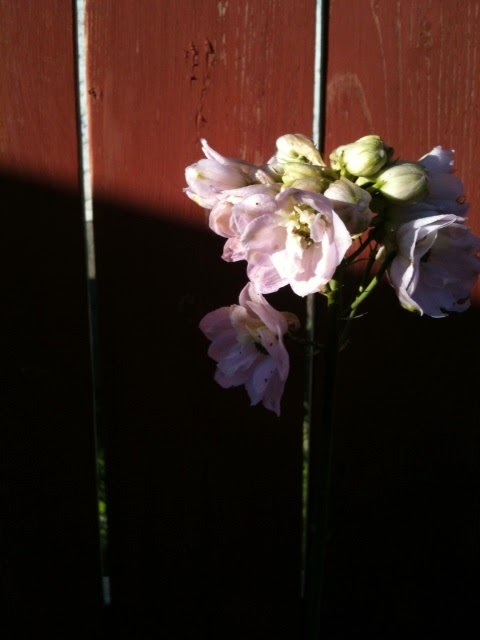 I've taken photos to the local garden center, but they can't tell me exactly what it is.  A faerie flower perhaps. 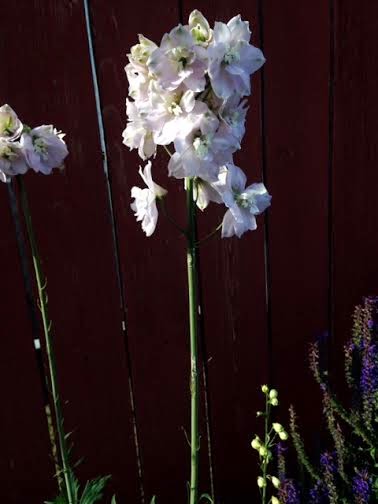 I'm so glad I didn't pull it out, those four years ago.  I tell my silly self that this is how you know magic is real. When flowers appear that you did not plant - that you can't imagine you've ever seen the likes of before. 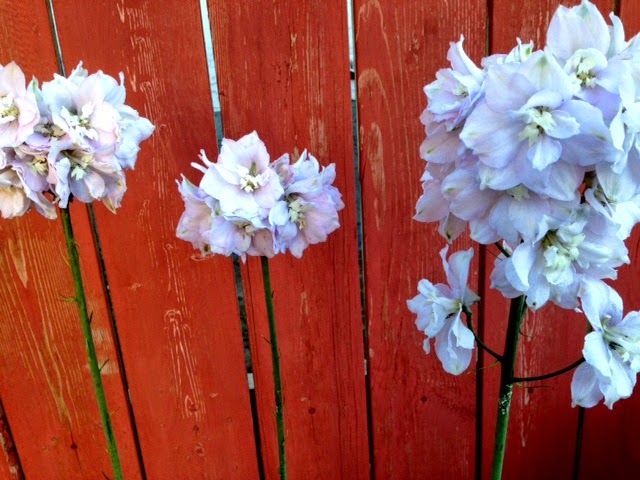 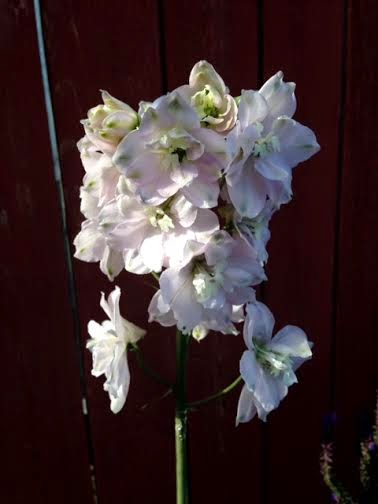 Have you ever seen anything exactly like my mysterious beauty?  I'd love to know!  By its foliage and flower I'd have to say its a delphinium-of-sorts.  Perhaps the blue one down the garden had a love-affair with the racy pink foxglove, and this odd duck is the product.

How it found its way to my little garden I may never know, but I'll treasure its company each summer and remind myself that strange and wonderous things do happen. Sometimes right under your nose.

What beautiful flowers! This is exactly the sort of thing that used to happen when I had my magickal garden. Oh, how I miss it.
Mary

I can't get the plants I did plant to come back, much less wayward fairy plants! It does indeed look like a delphinium, but not. Pretty neat!

what a nice surprise!

Debra She Who Seeks said...

"Volunteer" flowers can be the most fun!

It certainly is a beauty!

It's so pretty, but I don't know the variety either...

It certainly looks like a mixed colour delphinium. I love it when mystery flowers pop up - makes things exciting!

Wow - I think you just saved me from pulling out my delphinium !! I have a mystery plant that i've been watching and wondering what it was. I have no recollection of planting it, but since I am the "lone" gardener, I must have. Delphinium you say ..... hmmmm .... i'll keep waiting for the flower

Bet my best dibble that it is a Delphinium, albeit a rouge, a mutation, a happy accident! Save the seed!!

Delphinium does come in some pink varieties, so it could be that. But to me your beautiful volunteer looks like pink larkspur. Try a google image search and see if you think so too.

You know, I did have a blue variety of larkspur in the bed beside that plant. A strange cross perhaps.

Welcome to the Garden Three Cats and a Broom 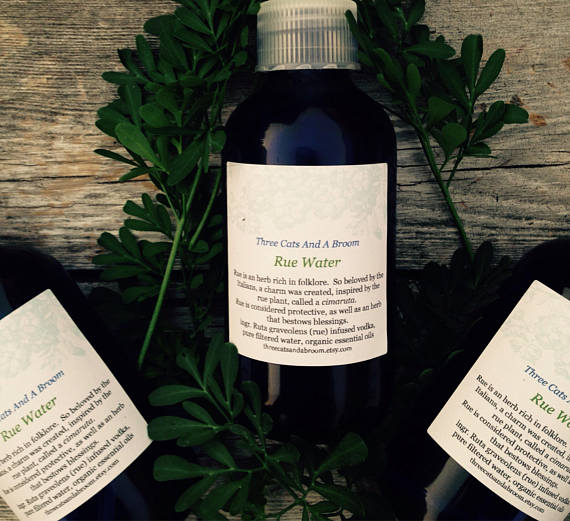 Sister Apothecary of Rue and Hyssop 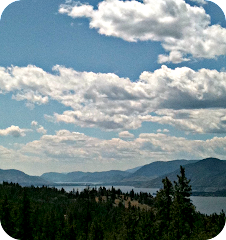 A Favourite Bit of Rue and Hyssop

Howling winds and bitter-cold nights softened into marshmallow snowfalls, which then faded into verdant greens emerging from earth and bud. ... 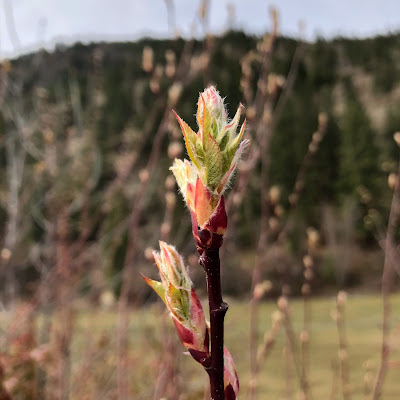